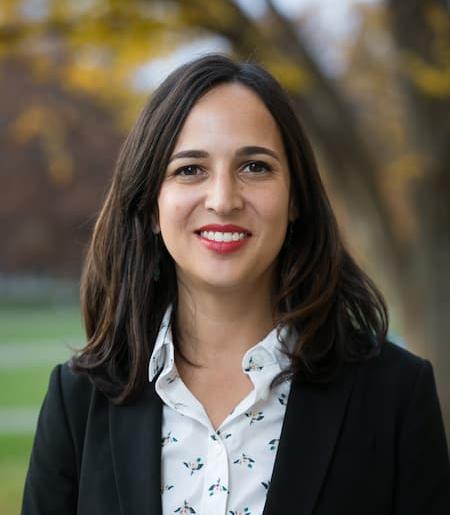 Ananda Cohen-Aponte is Associate Professor of History of Art who works on the visual culture of colonial Latin America, with special interests in issues of cross-cultural exchange, historicity, identity, and anti-colonial movements. Her research and teaching also explores legacies of colonialism in contemporary Latinx art. Her book, Heaven, Hell, and Everything in Between: Murals of the Colonial Andes (University of Texas Press, 2016) explores the intersections between art, politics, religion, and society in mural paintings located in colonial churches across the southern Andes. This work draws on nearly a decade of archival and primary source research to understand the ways that artists appropriated European religious iconography to articulate local narratives, transforming the medium of muralism into a powerful barometer of indigenous and mestizo life under Spanish colonial rule. She also served as editor and primary author of the book Pintura colonial cusqueña: el esplendor del arte en los Andes/Paintings of Colonial Cusco: Artistic Splendor in the Andes, published as separate Spanish and English-language editions (Haynanka Ediciones, 2015). Her essays appear in a range of journals and edited volumes, including Colonial Latin American Review, The Americas, Allpanchis, RES: Anthropology and Aesthetics, and Latin American and Latinx Visual Culture, among others. She is currently conducting research on a new project that explores the role of the visual arts in fomenting an insurgent imaginary in late 18th-century Peru and Bolivia within a context of inter-ethnic conflict and rebellion.

Dr. Cohen-Aponte was recently awarded the 2019 Robert A. and Donna B. Paul Academic Advising Award for her commitment to undergraduate advising and has received recognition for ongoing efforts to create equity in the discipline of art history through a pilot project called "Pathways to Art History."

“Decolonizing the Global Renaissance: A View From the Andes,” in The Globalization of Renaissance Art: A Critical Review, ed. Daniel Savoy (Leiden: Brill, 2017), 67-94. ** Received Association for Latin American Art (ALAA) Award for Best Article or Essay Published in Latin American Art History in 2017-2018.

Heaven, Hell, and Everything in Between: Murals of the Colonial Andes (University of Texas Press, 2016).

"Painting Beyond the Frame: Religious Murals of Colonial Peru" (digital supplement to Heaven, Hell, and Everything in Between published by MAVCOR: Center for the Study of Material and Visual Cultures of Religion, Yale University, 2016).

"Making Race Visible in the Colonial Andes," in Envisioning Others: Race, Color, and the Visual in Iberia and Latin America, ed. Pamela Patton (Leiden: Brill, 2015), 187-212.